This article is reproduced from an article on the Mount St. Mary’s website and is used with their permission. 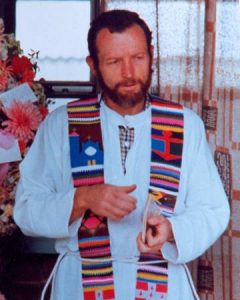 Emmitsburg, MD – More than 30 years after his assassination, Rev. Stanley Rother, S’63, was formally recognized as a martyr by a special Theological Commission at the Congregation of the Causes of Saints in Rome. This recognition brings his case for sainthood one step closer to canonization.

Father Rother graduated from Mount St. Mary’s Seminary in 1963, when he was ordained for the priesthood in the Archdiocese of Oklahoma. In 1968, he joined a group of Catholic missionaries heading to Guatemala to work with the Tzutuhils, an indigenous people suffering from extreme poverty. In the summer of 1981, he was slain in the church’s rectory by three men believed to be members of an extremist death squad associated with the corrupt Guatemalan government.

“Father Rother laid down his life for Christ and for the people of his parish in Guatemala, whom he dearly loved. It is very encouraging to move one step closer to formal recognition by the Church of Father Rother’s heroic life and death as a martyr for the Gospel,” said the Most Rev. Paul S. Coakley, S’83, Archbishop of the Archdiocese of Oklahoma City.

The tiny Guatemalan town of Santiago Atitlán was among the poorest places in Central America. Men earned 25-to-70 cents a day for hard agricultural labor. More than half of all children died before the age of six. Responding to Pope John XXIII’s request, Catholic missionaries from Oklahoma arrived in 1964. They helped to establish a credit union, weaver’s cooperative, a health clinic, a Tz’utujil-language radio station, and a school. By 1974, all of the dozen missionaries returned to Oklahoma with exception of Father Rother.

Father Rother stayed to continue the development of these programs and to build stronger social organizations within the indigenous community. The radio station broadcasted educational and literacy programs, and cooperatives offered economic opportunities to artisans and agricultural workers. Father Rother worked hard physically to aid in these projects, often running a bulldozer from sunup to sundown, in addition to fulfilling his duties as a priest.

The military arrived in Santiago Atitlán in July 1980. Patrolling groups of three‑to‑four soldiers with submachine guns terrorized the townspeople, many of whom had never seen guns. These armed soldiers pressed the people for information about their community leaders. The radio station, Voice of Atitlán, which was broadcast in the Tzu’tujil language, was targeted in late 1980. Its director was murdered and much of the equipment stolen. Several people in the community disappeared. During this time, Father Rother often reclaimed the corpses of his friends from creek beds to give them proper burials.

By July 1981, eight priests had been killed or kidnapped. After 16 people in the town were massacred soon after, Father Rother learned that he too was on a death list. He returned to the United States for his safety, but being away from Santiago Atitlan was agonizing. Father Rother’s father remembers that while at home, he would stare out a window and say, “I’m going back. I can’t leave my people like that.”

Father Rother understood the risk of returning, but he’d made it clear that he’d invested his entire life in Santiago Atitlán. These were his people and he deeply felt they needed him more than ever — no matter the cost.

After his murder at the hands of the Guatemalan right-wing government, thousands gathered in the main square to mourn his death. When his body was to be taken back to Oklahoma for burial, they pleaded to keep his heart, which was removed during the autopsy and buried in Santiago Atitlán. The bloody conflict in Guatemala officially ended in 1990, claiming the lives of hundreds of thousands, perhaps millions of civilians, mostly the indigenous poor.

“Fr. Stanley Rother is an inspiration and model of selfless love in his life lived for others. As a graduate of the seminary at Mount St. Mary’s, he served others in the day‑to‑day life of his parishioners in Guatemala as a missionary. Even amidst danger and threats to his life, he spoke out against injustices and heroically served his people. His life will inspire both graduates of Mount St. Mary’s University and people everywhere,” said Fr. Brian Nolan, a university chaplain.

Blessed Stanley Rother, pray for us!